6 Movies That Deviate from the Source Material

We're always looking forward to a book-to-movie adaptation, even if the movie trailer and its source material have less in common than a walrus and a carpenter. But, hey, differences can inject some spice into what might otherwise be a pretty stale movie.

Here are six other movies that deviate from the text on the page...with varying levels of success.

Winston Groom's novel sees Forrest Gump as a six-and-a-half-foot tall idiot savant with a foul mouth. The Robert Zemeckis film reimagines him as a gentler soul who's roughly the size of Tom Hanks (okay, exactly the size of Tom Hanks). In the novel, Forrest blasts off into space with an ape and is later captured by cannibals in Papua New Guinea. Both versions of Forrest start a shrimp business, although the movie proves that the most effective bait for shrimp is of the Oscar variety. 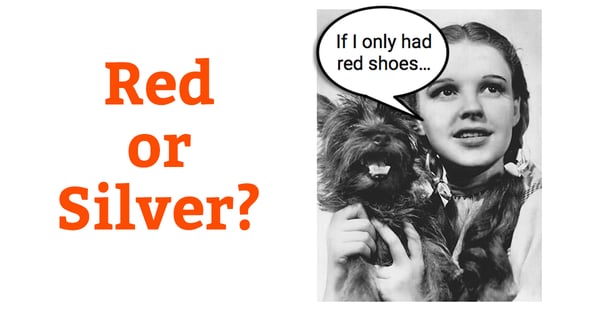 As Cinderella, Carrie Bradshaw, Tom Cruise, or anyone else who wears shoes to transform themselves into a princess would attest, footwear is the most important part of any outfit. Considering that fashion wisdom, it's not surprising that the most striking difference between the Technicolor classic and L. Frank Baum's original story is what's on Dorothy's feet. In Baum's story, Dorothy's shoes are silver. But to take advantage of color technology, the shoes in the film are an eye-popping, sparkly ruby. There's no place like home…except for maybe a DSW.

The Steven Spielberg film set the bar astronomically high for blockbuster action. But it's not just the lack of CGI that makes the book seem tame in comparison. After all, in Crichton's novel, Ian Malcolm is just words on a page. In the movie, he's Jeff Goldblum. Need we say more?

We're guessing the original title of the Philip K. Dick novella—Do Androids Dream of Electric Sheep?—just wouldn't fit on a poster...the text would obscure the chiseled profile of Harrison Ford. But we should be thankful there's only one title (Blade Runner), because there are seven different versions of the movie. If you get your mitts on all of them, you're in for an all-day one-movie marathon.

5. The Fellowship of the Ring

Before Peter Jackson made three films from one small book, he made one film each from three large books. Without making any cuts, the films would be like Gandalf's untrimmed beard: unruly, unkempt, and with week-old crumbs of stale honey cake buried within. Jackson made one major excision from Tolkien's The Fellowship of the Ring: the singing woodsman Tom Bombadil. In the film, Bombadil is notoriously missing. He's kind of like Alex Trebek's mustache: once it's been gone long enough, you forget it was ever there.

Anthony Burgess's original novel was infamously censored in the U.S.: the twenty-first chapter got the boot. Kubrick only read the twenty-chapter version, so his ending is a bit different. The novel shows Alex grow up a bit, whereas the movie brings him back to square one. Kubrick's ending puts us in the awkward place of rooting for a violent murderer. Thanks, Stan.

Next time you head to theaters for a book turned blockbuster, make sure to read the book, too. Just be sure to wipe the popcorn butter off your hands first. No one likes a greasy e-reader.

"My mama always said life is like a box of chocolates. You never know what you're gonna get."

Life and film adaptations, that is.