To Kill A Mockingbird is still winning literary contests. Why?

Attempted murder.... of a kid. Child rape. Incest. Violent alcoholism. Racism redux. Sounds like the evening news, right? Or maybe the plot for Stephen King's next novel. Or just another day in Somalia. But no. These edge-kissing sub-topics are core elements of what was just voted the most beloved novel of all time, read by 12 year olds all around the globe—"To Kill A Mockingbird."
PBS just polled (monkey-surveyed if you found them online) - and readers spoke. TKAM officially won the 100 meter Best Literature contest at the LitOlympics. If you don't remember the book's edges, let us refresh: It's the story of Scout, a little girl growing up in the Deep South, who witnesses racial injustice and the eventual accusation and murder of a black man for a crime he did not commit. 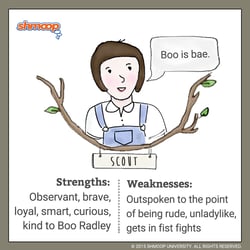 The book was written in 1960 and set in the 1930s South when, amazingly, drinking fountains were separate, white privilege really had teeth, and it was totally fine to beat your kids with a stick. Over 4 million readers were surveyed in this "The Great American Read", with "Outlander" (yes, the domestic-disciplinary TV series), Harry Potter, Lord of the Rings (not about men's gymnastics), and Pride and Prejudice all finishing well behind TKAM in the votes.
Nobel prize winning literary critic Meredith Vieira quarterback'd the poll. Oh, wait. No. She's a TV talk show host, actually. But she reads. Que-cards? Not easy. The text goes by so fast.
For those of you with cynical leanings toward anything Hollywood and unaudited survey-ish, yes, this whole even was likely a clever marketing stunt for Hollywood Producer Aaron Sorkin's soon-to-Broadway stage play, "To Kill A Mockingbird". Sorkin is reknown for is spectacular creative talent - The West Wing, The Social Network - as well as his well-crafted arrests for cocaine possession and the modern-day felony-equivalent in having once been friends with Charlie Sheen.
Rumor has it that after the Sheen rift, Sorkin originally wanted to rename the stage play "To Kill A Formerly-Powerful-But-Now-Drug-Addled-Child-Of-Hollywood-Legend" but apparently Charlie was booked, doing voice-overs for the new "This is your brain.... This is your brain on Facebook" commercial series. 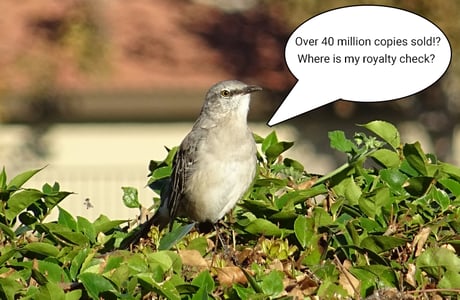 The book has sold 40 million copies to date and remains one of our most prolific page view getters on Shmoop, for which we are ever so grateful. When you get past the powerfully-written "soul-crushing emotional brutality" of the era somebody has to pay the rent. So if you want to read more about this awesome, ethereal work, when you come to our Shmoop pages and see an ad, think: Phil Knight. Yep. Just click it.